Carbohydrate is one of the 3 main macronutrients in food, and is the one that has the greatest effect on glycemic control.

Controlling the amount of carbohydrate can help to control blood glucose. There are different strategies that might be used to assist in controlling carbohydrate, from simple to complex. The strategy used is individualized.

This strategy involves having a consistent amount of carbohydrate every day for each of breakfast, lunch, supper and snacks. It might be recommended as an initial strategy in someone who is newly diagnosed, with the idea that a more flexible strategy will be used later.

For some people, eating a consistent amount of carbohydrate is not a hardship, because they are very regular with their habits. For other people, this guideline is very restrictive.

Commonly used teaching materials include the AHS handout, Healthy Eating for Diabetes and the Diabetes Canada poster "Beyond the Basics".

Carbohydrate budgeting refers to a strategy whereby a person has a specified amount of carbohydrate to consume at meals and snacks. The budget is often given as a range; a pretty standard guideline would be:

Carbohydrate foods are grouped into portions (referred to as choices) that provide 15 g available carb per serving. Available carb is the carbohydrate that is digested and appears as glucose in the blood. It includes both starch and sugar, but does not include fibre.

Examples of foods and portions that count as 15 g available carb include: 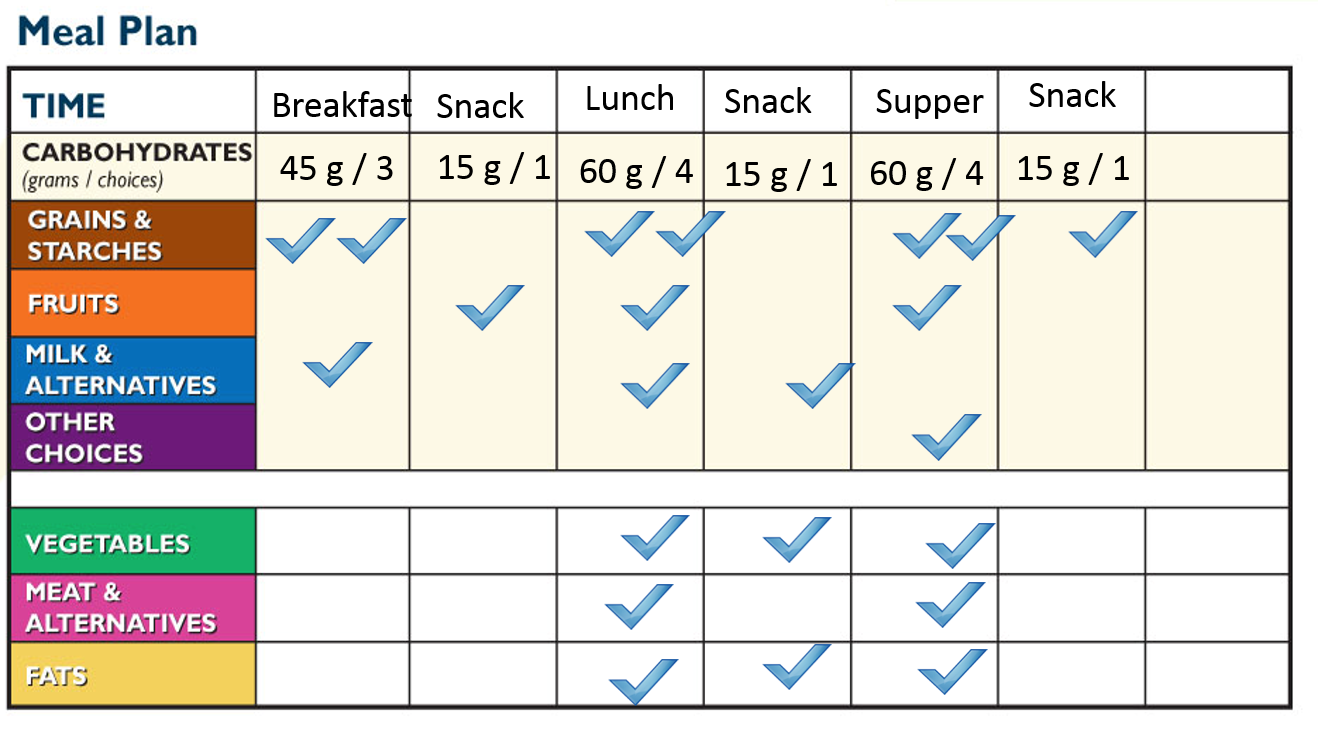 In the example meal plan shown above, the check marks are used to indicate an approximate number of choices to aim for at meals and snacks.

A simplified form of carb counting has people adding up the number of carbohydrate choices as specifed above, and dosing bolus insulin for carb, based on that. As an example, a person might use the guideline of 1 unit insulin for 1 carb choice.

The strategy may work as a compromise for people who are not good at math and have trouble with more advanced forms of carb counting, but still allows for some variability in carb intake.

The concept may sometimes be used as a stepping stone to more advanced carb counting.

As an example only:
If the patient agrees to take 1 unit of rapid insulin for each carbohydrate choice, they might refer to one of the handouts noted. Given the following meal:

That adds up to 3 carb choices, so they would take 3 units of rapid insulin for the carbohydrate in the meal. Depending on the glucose reading prior to the meal, they may also add some correction insulin.

An example of a Carb Ratio is 12 (or ICR of 1:12). This means that each 12 g of available carbohydrate is estimated to need 1 unit of insulin.

An advanced modification that may be used by a few people, is to separately add the protein and fat being consumed, use another calculation to account for those, and add the units to the amount determined for the carb. This is not commonly used by patients, as it involves a lot of steps. Please refer to the Insulin for Protein and Fat page for more information.

To calculate the carbohydrate at a meal

A complete suite of AHS patient nutrition handouts are found on the NFS web page under "Diabetes".